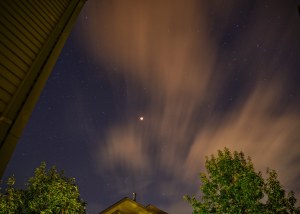 During the total lunar eclipse period from 10:11 pm through 11:23 pm on September 27, 2015, the sky was dark without the moonlight and there were plenty of stars in the sky so I quickly grabbed my other camera and set up to take star and moon trails for 40 minutes until all the stars began to fade when the moonlight re-appeared. The result was surprisingly interesting. As you may guess the bright thick trail in the middle of image was the moon movement in 40 minutes. However, the more amazing pictures were the individual shots with camera setting of f/3.5, ISO=400 and speed of 30 sec. (for regular interval shot of star trails) that showed the moon as a bright spot and cloud in dancing motion.